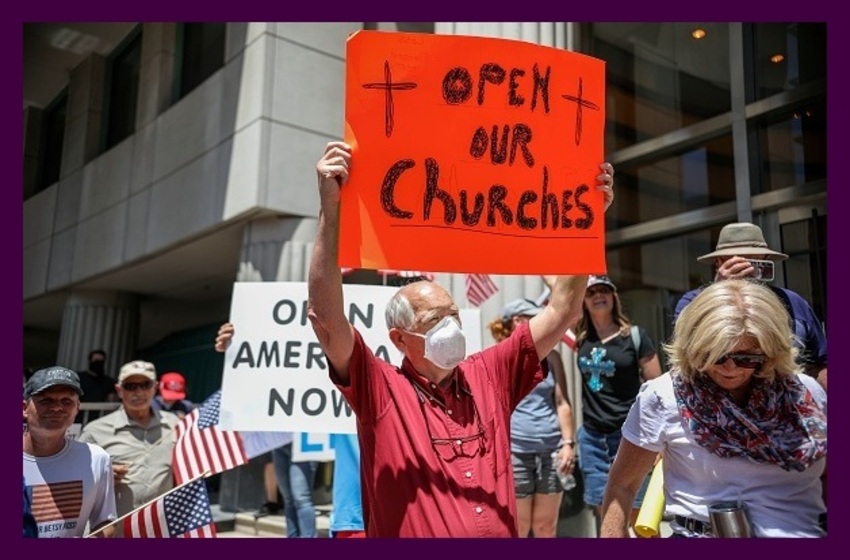 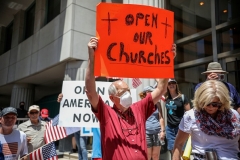 Nationwide, calls are growing to reopen churches. Here, the protest took place in San Diego on May 1. One Virginia church is suing the Commonwealth in federal court. (Photo by SANDY HUFFAKER/AFP via Getty Images)

Gov. Ralph Northam of Virginia stood behind a podium at the front of the room—wearing no mask—but looking like he had an important message to deliver.

He was issuing an order to the Virginia Alcoholic Beverage Control Authority. As part of his strategy to deal with COVID-19, Virginia restaurants and bars would now be able to sell mixed drinks for takeout or delivery.

While Northam was making this and other announcements, a photographer from the Associated Press was taking pictures. One showed there were at least 21 people in the room — in addition to Northam.

That gathering of more than 20 people around Northam occurred more than two weeks after he had issued an executive order making “all public and private in-person gatherings of more than 10 individuals” a crime.

It occurred more than a week after he had issued another order clarifying that his ban on gatherings of more than 10 people “includes parties, celebrations, religious, or other social events.”

Northam did make exceptions to his rule. It did not apply, for example, to “essential” businesses — including Virginia retailers that sell beer and wine.

He also, apparently, did not apply it to his own press conferences.

Nor should he have.

The First Amendment guarantees freedom of the press. Given that the reporters at Northam’s briefing (as evidenced by the AP photo) maintained a healthy social distance from one another, what justification would the governor have for sending police in to arrest them?

But Northam’s ban does apply to churches—and the police in one Virginia community have enforced it there.

On Palm Sunday, a small group of worshippers gathered at the Lighthouse Fellowship Church in Chincoteague, Virginia.

The church has now filed a lawsuit against Northam in federal court. Its complaint spells out what allegedly happened.

“On April 5, 2020, Lighthouse held a worship service at its church property in Chincoteague Island, Virginia, with 16 individuals attending, only 6 people over Governor Northam’s 10-person restriction,” says the complaint.

“Lighthouse,” it says, “executed stringent social distancing and personal hygiene protocols, including extensive and enhanced sanitizing of common surfaces in Lighthouse’s building prior to the service, requiring attendees to remain at least six feet apart and use hand sanitizer prior to entering and during movement inside Lighthouse’s building.

“Lighthouse’s church building has a total occupancy limit of 293 individuals by virtue of the government’s fire inspection,” says the complaint, “and its sanctuary where its worship services are held typically seats approximately 225 persons.”

“Lighthouse’s social distancing, personal hygiene, and enhanced sanitizing practices complied with all of the recommended practices for ‘essential’ and ‘non-essential’ businesses that are permitted to continue to operate with more than 10 people present,” said the church’s complaint.

But the police came anyway.

One came 45 minutes before the service started. “Upon entering the building at Lighthouse, the officer merely demanded that there be no more than 10 people and that all must be spaced six feet apart,” says the complaint.

The church noted in its complaint that the 16 people at the service Wilson was cited for equaled only 7% of the total seating capacity of the church.

The complaint then noted that Northam does not even follow his own rules.

“In publicly released photographs from Governor Northam’s own thrice-weekly press conferences, even he does not abide by his 10-person limitation on ‘in-person’ gatherings,” says the complaint.

To illustrate this point, the complaint includes a copy of the AP photograph of the 21 people at Northam’s April 8 briefing.

This Sunday, the U.S. Justice Department presented a “statement of interest” in the case to the federal court.

“Based on the materials before the Court,” says the DOJ statement, “Plaintiff has demonstrated a likelihood of success on the merits of its claim under the Free Exercise Clause of the U.S. Constitution that the Commonwealth’s executive orders have prohibited religious gatherings at places of worship, even with social distancing and personal hygiene protocols, while allowing comparable secular gatherings to proceed with social distancing.”

In Ralph Northam’s Virginia, 20 people can enter a store that sells beer and wine and rudely brush past one another in the narrow aisles.

But if 16 people were to meet on Easter in a church that seats 225, they would be criminals.

(Terence P. Jeffrey is the editor in chief of CNSNews.com.)