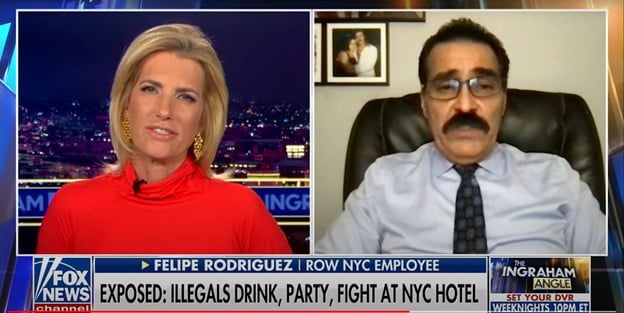 Conservatives often correctly point out Democrats care more about the feelings of illegal aliens and other lawbreakers rather than the plight of upstanding Americans. A New York City whistleblower laid out a particularly egregious case of illegal alien coddling and taxpayer abuse to Fox News’s Laura Ingraham on Wednesday night.

Felipe Rodriguez, the whistleblower, has been an employee at the Row Hotel since 2017. He explained that more than 36,400 illegal migrants have arrived in NYC in the last few months and city taxpayers have spent millions caring for these invaders.

NYC officials have placed them in at least 14 hotels at zero cost. One of these is the Row.

Since illegal aliens have taken over, the hotel is in “complete chaos” according to Rodriguez.

The chaos that we see at the Row today is compiled by migrants being drunk, drinking all day, smoking marijuana, consuming drugs, and domestic violence, uh, people having sex in the stairs, young people, teenagers, they use the fire exit stairs to go in there and do that they do.

Rodriguez went on to tell Ingraham that the indolent, violent illegal aliens don’t even bother cleaning their rooms and hoard their filthy clothes everywhere. Even more infuriatingly, hotel staffers are barred from saying anything to them.

We have people actually trying to act like the hotel is theirs and we have no rights. The form in which they keep their rooms is horrendous. They don’t clean it, they don’t fold their clothes. It’s piles and piles, they’re hoarding clothes, they’re hoarding whatever they can hoard.

There’s no accountability. And when you go into their rooms and say something, the hotel management, especially the GM [general manager] has directed us that we’re not allowed to tell them nothing. They have carte blanche at the Row.

Rodriguez compared the extreme privilege the migrants are enjoying at taxpayer expense in contrast to people like him having to actually work to put food on the table.

There was a time in 2017, where I paid a lot of money to house my wife and my kids. There was a lot of stuff I had to be responsible for.”

Fortunately for the migrants, they got the government of the United States to hand them carte blanche to do as they wish. They go in and out of the hotel at will.

Rodriguez then divulged that the migrants are spreading “all types of illnesses.” These diseases include chicken pox and COVID-19. He also said the general manager only cares about the money he’s making off the city government instead of putting the hotel workers first.

You’ve got people sick in there that are spreading all types of illnesses like chicken pox and COVID. Right now, the ones that