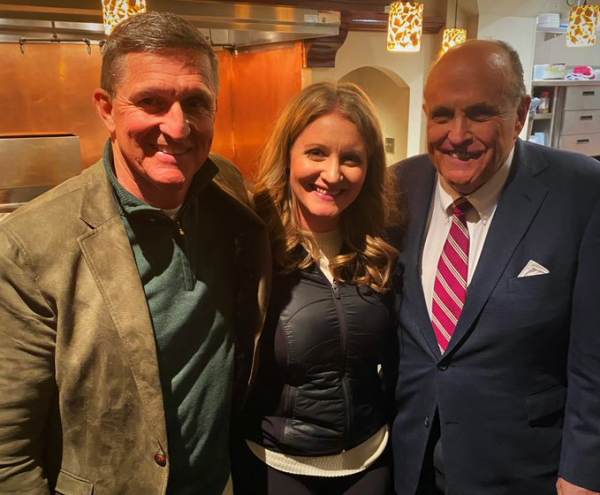 Ellis posted the photo at 12:30 a.m. EST Thursday with the caption, “Late night at the office…Patriots and #TeamTrump @RudyGiuliani @GenFlynn”

Late night at the office…

One can’t help but wonder what a non-attorney like Flynn is doing hanging out with the President’s election attorneys so late at night. Perhaps he stopped by to give a morale boost. Or perhaps the former head of the Defense Intelligence Agency under President Obama and former Trump national security advisor is lending his expertise in national security and intelligence to Trump’s legal team as reports come out of votes being routed overseas for processing by a foreign company before being routed back to the States.

Sydney Powell, Flynn’s attorney in his effort to dismiss the long-running bogus federal criminal case against him by the Deep State, is also working to help the Trump campaign in its elections fight.

The trio had plenty to smile about after news broke Wednesday night that the two GOP Wayne County, Michigan members of the Board of Canvassers rescinded their coerced vote from Tuesday to certify the Wayne County vote despite massive irregularities.

Also Wednesday night, Republicans on the Wisconsin Board of Elections were able to block efforts by Democrats to enact last minute changes to the state’s recount procedures after the Trump campaign filed and paid earlier Wednesday for a recount of two counties, Milwaukee and Dane.

Excerpt from a report by the Milwaukee Journal Sentinel: