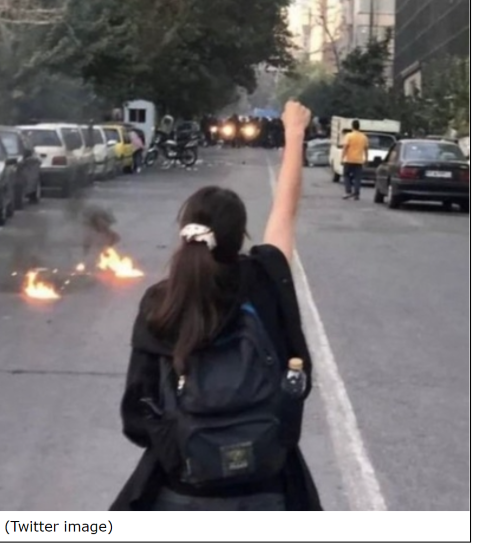 As of this writing, heartbreakingly brave Iranian women have been protesting for 10 days and nights in the streets of at least 80 cities. They are risking death for the right not to wear hijab. Women have been burning their hijabs (headscarves) and cutting their hair. They’ve been heard chanting “Women, Life and Freedom,” and “Death to the dictator.”

The Iranian mullahs have unleashed the Revolutionary Guard and paramilitary (Basij) forces against them. They have been dragging women by their hair, banging their heads on the ground, tear-gassing, beating, shooting, arresting, and murdering them. Fatality estimates range from 50-400 protesters and bystanders.

These protests were sparked by the Sept. 16 death-in-morality-police-custody of Mahsa Amini, a 22-year-old Kurdish Iranian woman. She was apprehended while in a car with her family because she was, allegedly, wearing her hijab incorrectly. While the police denied beating or torturing her to death, a photo of Amini in a hospital bed reveals her bloodied face. She was in a coma.

Pro-government demonstrators also have been out in force, defaming the women and their male supporters as “Israel’s soldiers,” and shouting “Death to Israel,” and “Death to America.” The government has blacked out the internet and arrested journalists.

It is obscene that the Palestinian-American activist Linda Sarsour and U.S. Reps. Ilhan Omar and Rashia Tlaib have failed to say anything about these brave Iranian women, let alone offer their moral support.

Sarsour and Omar continue to glorify their wearing of hijab as a protest against white racism and alleged “Islamophobia.”

When will this trio condemn the mad mullahs and their murderous morality police? These Twitter queens are rarely shy about sharing their views on the big news stories. But thus far, they’ve only managed to retweet someone else’s words.

Tlaib retweeted a “solidarity” statement from U.S. Rep. Alexandria Ocasio-Cortez, who wrote that “the right to choose belongs to us all, from hijabs to reproductive care.” Sarsour retweeted another statement against “forced hijab” by a lawyer, Azadeh Shahshahani. Omar retweeted “To be (hijabi) or not (hijabi) is the business of no state or man” by Yasmin Abdel-Magied.

Why can’t Sarsour, Omar, and Tlaib speak in their own voices at a press conference? Or in Congress?

When will these high-profile professional defenders of Muslims decide that Muslim women are also worthy of defending? When will they hold Muslim men – who are mis-using or using the Quran to terrify and subordinate Muslim women – accountable?

Too many women around the world are compelled by law and by threats of family violence to wear a hijab or the face-veiling niqab. As I argued in 2010, the burqa and niqab condemn women to an ambulatory sensory deprivation chamber, and violate a woman’s right to health, safety, freedom, and dignity. It is also a statement of Islamist power and control over women’s bodies and lives. Afghan, Saudi Arabian, and to some extent, Iranian women have also been deprived of sunlight, visual acuity, and any and all spontaneous social lives in the public square.

When I was in Afghanistan, I saw women sweat, stumble, trip, and sometimes fall. If they were not super-wealthy, they were often juggling babies and shopping bags under their flowing garments. In interviews and in memoirs, one learns that face and body veiling also induces anxiety and claustrophobia. Many women have trouble breathing.

Twelve years ago, I did not argue for banning the hijab, a head covering. It does not obscure one’s identity, although, in the West, it can still set one apart from others depending on how large, dark, unfriendly, or “forbidding” the hijab is.

However, in Mahsa Amini’s honor, I am rethinking that position. As long as one woman anywhere can be harassed, beaten, arrested, or murdered because her hijab has slipped or is seen as improperly worn – Western women, including highly visible activists and politicians like Sarsour and Omar, should consider voluntarily ditching their hijabs. When all women are free to wear or not to wear a head-covering – then, and only then, might women choose what is right for them.

Clearly, the Iranian women and their male supporters find their lives intolerable. They’d rather be dead than continue to live in the prison that Iran has become for all but the ruling mullahs and their hirelings. According to Shadi Sadr, an important human rights lawyer, “They have nothing to lose. They are standing up and saying ‘Enough of this. I am willing to die to have a life worth living.'”

The demonstrations, however, are about more than women’s rights. Iranians have demonstrated in massive numbers before. In 2009 over election fraud, in 2017 over economic misery, and in 2019 over fuel prices. Each time the government suppressed the uprisings with bullets, tear gas, beatings, arrests, torture, and murder. What might be required for a different outcome to occur?

In a personal interview, my esteemed colleague, Ibn Warraq, points out: “The protesters lack leadership and above all they lack weapons.”

Ibn Warraq also points out that “At some point the army would have to flip, refuse to kill their own people.”

Is this possible? Can it ever happen?

Are a people who were able to drive out the Shah also capable of driving out Khomeini’s mullahs? That is the question. 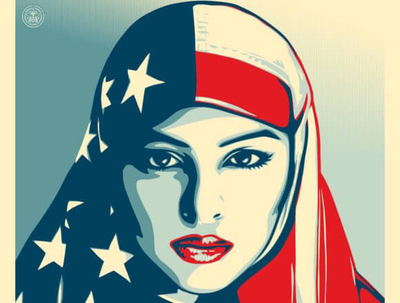 For all its very serious faults, including using the American flag to fashion a hijab for the marchers, Sarsour was part of a Women’s March leadership that drew hundreds of thousands of people. Tlaib and Omar have run multiple successful campaigns.

Imagine if they applied their organizational skills to rallying Americans to take to the streets in support the heroic Iranian women and men who are risking their lives for the freedoms we enjoy in America.

It could show the Iranians that we stand with them, and that moral support might help keep them going. Sadly, we are unlikely to find out.

Phyllis Chesler is an Emerita Professor of Psychology and Women’s Studies at the City University of New York (CUNY), and the author of 20 books, including Women and Madness, and A Family Conspiracy: Honor Killings. She is a Senior IPT Fellow, and a Fellow at MEF and ISGAP.