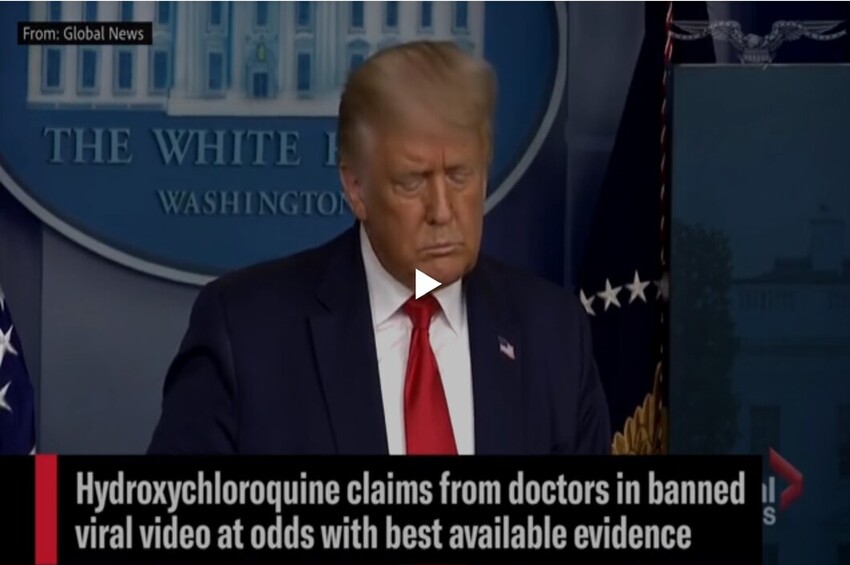 The battle over hydroxychloroquine began as a kind of trivial but apparently earnest and hopeful celebrity endorsement of the drug (the celebrity being President Trump). It has devolved into a real political and public-discourse horror show.

Perpetual back-and-forths between those prominent doctors who do not believe in the drug’s effectiveness — coronavirus task force members Anthony Fauci and Brett Giroir are two — and dissident, lesser-known doctors such as Harvey Risch of Yale University, have given birth to serious questions about how truly scientific the whole conversation has been.

Can hydroxychloroquine be used effectively to treat COVID-19? The most prominent voices say no, citing several randomized controlled trials, but others say it is, citing their own clinical evidence.

The question that nobody seems to be asking is, what is the standard of evidence required for granting emergency use authorizations, or EUAs, for drugs in the first place? And what are the limits of various kinds of clinical trials?

The Food and Drug Administration approved an EUA for use of hydroxychloroquine and chloroquine in hospitalized patients on March 28. Importantly, for the purpose of reinforcing distinct categories, its authorization was for a targeted use: hospitalized patients. When the FDA authorized the drug, there was no significant evidence of effectiveness from randomized controlled trials, or RCTs.

In a March 28 letter on authorization, FDA Chief Scientist Denise Hinton wrote, “Based upon limited in-vitro and anecdotal clinical data in case series, chloroquine phosphate and hydroxychloroquine sulfate are currently recommended for treatment of hospitalized COVID-19 patients in several countries … FDA is issuing this EUA to facilitate the availability of chloroquine phosphate and hydroxychloroquine sulfate during the COVID-19 pandemic to treat patients for whom a clinical trial is not available, or participation is not feasible.”

The letter suggests that randomized controlled trials are not the “gold standard” for authorizing an EUA. If they were, the March 28 EUA would not have gone through. RCTs do not appear to be the gold standard in other circumstances of drug approval, either. On July 31, the FDA granted accelerated approval of a cancer medication absent any randomized controlled trial.

Moreover, once the treatments and the trials began, researchers in the most notable studies followed those who the EUA had authorized for treatment, namely hospitalized patients. The FDA has since revoked its authorization of hydroxychloroquine on the basis of those various trials, determining no real effectiveness and even suggesting it is considerably dangerous.

These contextual points, along with a score of clinical evidence, are among the reasons that Risch, a professor of epidemiology at Yale School of Public Health, has argued in favor of using hydroxychloroquine to treat high-risk outpatients early in their disease.

To the evidence, Risch argues that doctors have offered more than enough evidence of hydroxychloroquine’s effectiveness for outpatient use in high-risk patients. To the authorization, the FDA does not need randomized controlled trials to issue an emergency use authorization. It could do so for outpatient use of hydroxychloroquine, and Risch says the evidence is there.

“We’ve been saying that the people to look at are the ones you have to treat,” Risch said in an interview with the Washington Examiner. “We’re talking about outpatient, high-risk treatment, and that’s it.”

Risch has emerged as a loud voice in favor of using the drug specifically for that category of patients, so loud and contrarian, in fact, that 25 fellow faculty signed on to a stinging rebuke of his advocacy for a targeted use of the drug.

Risch cites the clinical findings of doctors such as Vladimir Zelenko, a New York physician who has demonstrated success in treating high-risk outpatients with hydroxychloroquine, zinc, and azithromycin. He cites other evidence showing success in high-risk outpatients in Brazil and France, including reduced risk of hospitalization. Risch discusses these studies in a recent Newsweek op-ed and in a paper he wrote for the American Journal of Epidemiology.

These findings, he argues, demonstrate evidence even stronger than a “may be effective” standard, justifying an EUA for outpatient use. “The FDA can’t go up to a doctor and say, ‘You haven’t seen what you’ve seen,’” he said.

Risch’s other argument is that the clinical trials cited by the FDA as a justification for revoking the March 28 authorization, the same trials used by public health officials such as Fauci to dismiss hydroxychloroquine’s effectiveness, did not track high-risk outpatients early in their disease and, for that reason, can’t speak to that category of use.

Fauci and others have considered the hospitalization trials evidence that the drug simply doesn’t work, which is more than problematic for Risch. “The interference from those who do not want this comes from people who are blurring the distinctions.”

Risch argues that politics has damned the whole conversation, and science can’t run its course. “Show me negative evidence in high-risk outpatients where this was given early that it doesn’t work, I’ll shut up,” he said. “Show me evidence that it causes adverse events in outpatient usage in a way that surmounts the amount of death that is caused by people who don’t get treated, then I’ll shut up. Nobody has done that.”

Dr. Myron Cohen, a professor of medicine at UNC-Chapel Hill, made a similar observation in a recent editorial in the New England Journal of Medicine. “It would appear that to some extent the media and social forces — rather than medical evidence — are driving clinical decisions and the global COVID-19 research agenda,” he writes.

Whatever the ultimate truth of hydroxychloroquine’s effectiveness, it’s becoming more evident that there’s something going on at the intersection of medical science and public health policy that isn’t very healthy.