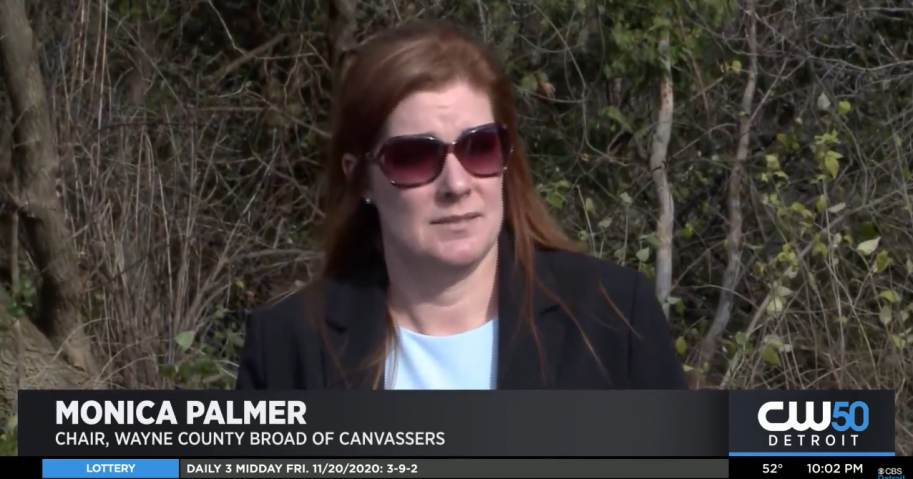 A woman in New Hampshire has been arrested on federal charges after communicating a series of threats to Monica Palmer, chair of the Wayne County Board of Canvassers, because Palmer had refused to certify the election for Biden in the wake of numerous accusations and proof of voter fraud. Threats included pictures of naked, mutilated bodies and pictures of Palmer’s own daughter.

The suspect, Katelyn Jones, apparently lives in Michigan, but was on vacation in Epping, NH when she was brought into custody. Her mugshot does not appear to be publicly available.

A criminal complaint was filed yesterday against a resident of Epping, New Hampshire for sending threatening communications to the chair of the Wayne County Board of Canvassers (Adult Victim-1), announced United States Attorney Matthew Schneider.

Charged was Katelyn Jones, 23, formerly of Olivet, Michigan. Jones was arrested this morning and will be making her initial appearance in federal court this afternoon.

“The allegations in this case should make all of us disgusted,” stated United States Attorney Schneider. “There is simply no place in Michigan, or in the United States, for chilling threats like this to people who are simply doing what they believe is correct.”

According to the affidavit, on November 18, 2020, Jones is alleged to have knowingly and willfully transmitted communications containing threats to injure AV-1 and her family due to actions AV-1 took in her official capacity at Chair of the Wayne County Board of Canvasers. The affidavit describes a series of threatening text messages that were sent from a phone alleged to be associated with Jones to AV-1’s phone. In those texts Jones called AV-1 a racist and a terrorist and used graphic and profane language. It is also alleged that Jones sent AV-1 two graphic photographs of a bloody, naked,