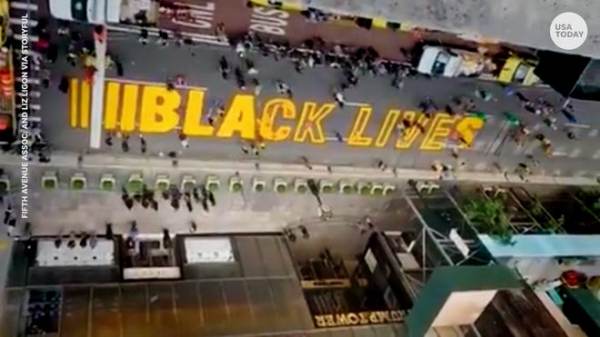 The pro-Trump organization Women for America First has sent a formal request to New York City Mayor Bill de Blasio requesting a permit to paint a street mural similar to the Black Lives Matter one he allowed outside Trump Tower.

“We have retained counsel should de Blasio continue infringing upon our Constitutional rights,” the organization’s founder Amy Kremer tweeted with the annoucement.

BREAKING: @America1stWomen has sent @BilldeBlasio a formal request asking to paint its own mural in NYC.

We have retained counsel should de Blasio continue infringing upon our Constitutional rights.

Tyranny MUST be stopped.

In the request letter, the group’s Executive Director Kylie Jane Kremer wrote “in light of New York City’s decision to open Fifth Avenue as a public fora and permit a bright yellow ‘Black Lives Matter’ mural to be painted on the street, I write on behalf of Women for America First to express our organization’s interest in likewise painting a mural of our own.”

The letter goes on to provide several different streets and areas that they would find acceptable, including outside the Gracie Mansion.

The city painted a massive and gaudy mural to Black Lives Matter on the portion of Fifth Avenue outside the Trump Tower on Thursday. CNN reported that “New York mayor rolled up his sleeves and painted a bit of the mural, too, clad in a mask and flanked by civil rights leader, the Rev. Al Sharpton.”