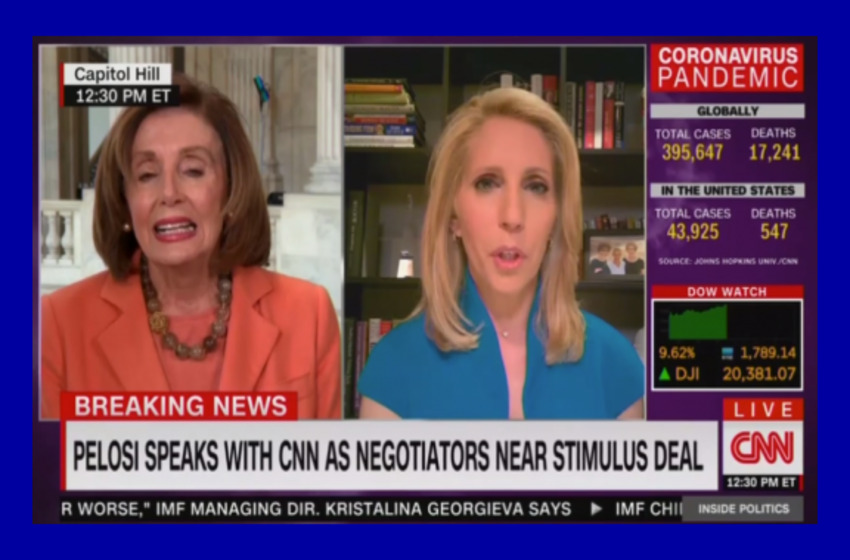 Unlike the friendly, compliant Andrea Mitchell, CNN (of all networks) actually questioned Nancy Pelosi’s botched efforts to get election reform and climate change legislation into the Coronavirus stimulus package. Perhaps Pelosi’s attempted spin was too much even for Dana Bash. On Tuesday, she told the CNN host: “Everything we are suggesting just relates to COVID-19.”

Bash reminded, “I’m sure you heard the Senate Majority Leader Mitch McConnell on the Senate floor today… saying that what you and the House have been asking for… [are] things on your wish list.”

Bash continued, “For example, they say that you asked for imposing new emission standards and carbon offsets on airlines, which is something that is in the Democratic wheelhouse…. Something that you would want in a perfect world, but not appropriate today. What’s your response?”

Even this gentle critique seemed too much for Pelosi as she appeared to forget her previous claim that “everything” in the bill was related to COVID-19. The Democrat responded by talking about fighting climate change: “Well, I think there is a whole concern in our country that if we are given tens of billions of dollars to the airlines that we could have a shared value about what happens to the environment.”

That doesn’t sound COVID-19 related. Bash saw the writing on the wall of a Pelosi loss, noting, “So, it sounds like you are signaling compromise here on some of those things that you put out. “

Pelosi insisted otherwise, claiming, “No, we’re not giving up on them.” But that’s exactly what happened. As The Washington Times reported on Wednesday:

She signaled in several television interviews that her troops would likely accept the deal that will emerge from the Senate, while casting her own 1,404-page bill, with a price tag of $2.5 trillion, as more of a marker for future fights over the direction of American priorities on energy, the work force, elections and immigration.

As liberal as CNN is, the network still contrasted to MSNBC. Andrea Mitchell on Tuesday let the House Speaker dictate terms, putting the responsibility on Republicans for compromise:

From your perspective – the House Democrats have yet to be heard from – what needs to be in this bill that is now being negotiated between Mitch McConnell, Secretary Mnuchin and Democrats in the Senate, in order to get House approval?

As for McConnell’s concerns, Mitchell waved them away:

I just want to give you a chance to respond to things that the President has tweeted, that Mitch McConnell said yesterday, saying they were close to a deal and then you came back – you came back from your extended vacation. You know, this is the back and forth that we’re seeing and I just wanted to give you the chance to respond, if you choose to.

A transcript of CNN’s questions can be found below. Click “expand” to read more:

DANA BASH: Madam Speaker, thank you so much for taking the time during these crucial times. My first question for you is this, over in the Senate where you are right now, your colleague, Senator Schumer just came out of the meeting with White House officials saying that he feels that they can overcome the few issues that you all have left in the next few hours, is that your understanding and how do you feel of where this $2 trillion package is headed in the Senate?

BASH: What is outstanding, what is remaining that you want changed?

Well, let me ask you about that because I’m sure you heard the Senate Majority Leader Mitch McConnell on the Senate floor today, he’s talked about it before saying that what you and the House have been asking for, and maybe even some Democrats in the Senate are, you know, things on your wish list. For example, they say that you asked for imposing new emission standards and carbon offsets on airlines, which is something that is in the Democratic wheelhouse —

BASH: — that something that you would want in a perfect world, but not appropriate today. What’s your response?

PELOSI: Well, I think there is a whole concern in our country that if we are given tens of billions of dollars to the airlines that we could have a shared value about what happens to the environment. But that’s an excuse and not a reason for Senator McConnell going forward.

BASH: Okay. So, it sounds like you are signaling compromise here on some of those things that you put out.

PELOSI: No, we’re not giving up on them.

BASH: I just want to translate something that you said earlier. You said you want to do this by unanimous consent. In non-congressional terms, am I reading you right today is what you are hoping is there is an agreement where you do not have to bring House members back, that you can approve this by voice vote?

BASH: But Your goal is get to the point where you reached everything you just said and the Senate passes the bill and the House — because you are all not. I mean, you are there in the Capitol. Members are back in the district, they’re not there. Your goal is to given the situation where we are is to avoid members of Congress getting on planes to fly back, if that’s possible.

BASH: I want to ask you about some signals that the President has been sending, both yesterday at his briefing and today on Twitter that he’s hear from conservatives that the cure can not be worse than the problem. The signal is he can start to open up the economy again because there is a lot of pressure on him to do that. On the flip side I am sure you see Liz Cheney, a top Republican in the House has tweeted effectively that’s not a good idea. Where do you stand and more importantly what is your message to the president about the time frame here and what should we fear, economy or health care?

BASH: I know you have worked with Dr. Anthony Fauci for a long time. He has advised Congress. He has advised members of both parties for a long time. He wasn’t at the press conference yesterday and there is some concerns among some that the President that although the President has been listening to him very intently and that may be changing, what’s your view on that and given how long you know Dr. Fauci?