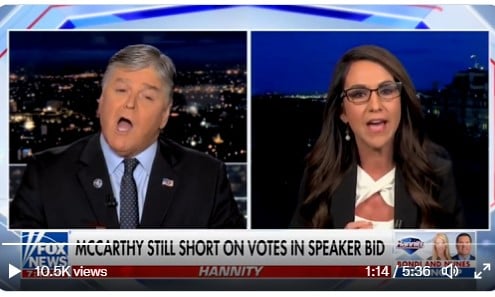 On Tuesday, Trump endorsed Kevin McCarthy failed three times to win the vote for US Speaker of the House. It was the first time in 100 years that Speakership was not decided in the first vote.

The winning Republican can only afford to lose four votes! He must reach 218 votes to win the Speakership. And the GOP holds a narrow 222 to 212 majority in the chamber.

This was despite the fact that President Trump endorsed Kevin McCarthy on Wednesday morning and urged Republicans to vote for McCarthy.

10 of the 20 previous rebels have now cast their votes, and they’ve all backed Donalds. I think it’s pretty safe to say that all 20 are solidly still anti-McCarthy.

On Wednesday Sean Hannity invited Rep. Lauren Boebert (R-CO) on to grill her on why she will not support Kevin McCarthy.

This was a shocking display by Sean Hannity.

The FOX crowd is FURIOUS that conservatives would vote against McCarthy who wanted to silence them all from social media. Why in the hell would they vote for him?

Sorry Sean, conservative voters are standing with these 20 Conservatives.

Hannity is losing his mojo.

Hannity is [email protected]: “I will not withdraw”