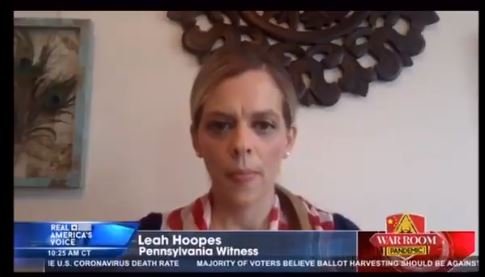 Leah Hoopes, a Republican poll watcher from Chester, Pennsylvania, testified before the GOP Pennsylvania Senate hearing last week Gettysburg. Leah described what she witnessed while doing her duties on election night as votes were being counted for President Donald Trump and Democratic nominee Joe Biden. Hoopes said she was kept in what she described as a “play pen” as an observer and no Republicans were allowed close to where the counting was taking place.

On Saturday Leah spoke with Steve Bannon and the War Room on Saturday and dropped this bombshell!

Leah Hoopes said the DOJ made a visit to her home to question her after she testified last week in Gettysburg.

Via The War Room:

So @hoopes_leah dropped a bombshell on War Room Pandemic yesterday: