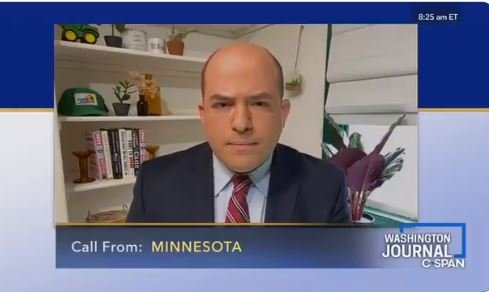 He was wanting to promote his book.

He did not expect this…

Minnesota C-SPAN caller: “I don’t know if there’s any journalists left at CNN, but I know that if I were to estimate about 300 different distortions or misinformation that we get out of CNN … if you added all that up to 46 months, it comes out to be 300,000-plus distortions of truth. This is how low you’ll go is that you went out, and you made lies, and you defamed a child, and then, you had to settle out of court to pay this child for distorting information about this young individual.”

Oh @brianstelter did not have a pile of fans calling in to C-SPAN today. This man really brought the pain, saying “CNN is the enemy of truth.” Stelter said yeah, Trump has “radicalized” people with this talk of media bias. Laughably claims MSM is structured to keep bias out! pic.twitter.com/fsDZIaePB7

A second caller attacked Stelter and his network calling him “Humpty Dumpty” on the air.

C-SPAN caller to Brian Stelter: “They put on FIERY BUT MOSTLY PEACEFUL PROTEST. Laugh there, Humpty Dumpty. We all know you’re not reliable.”

Stelter: “I think the idea is that Humpty Dumpty had a great fall so I guess he’s waiting for me to have a great fall?” pic.twitter.com/sQEJChz5Lp