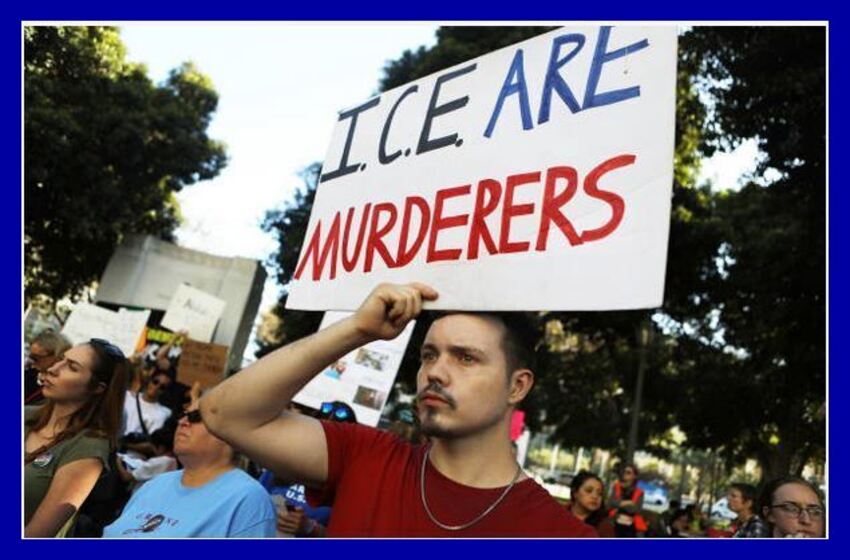 Protestors stand a women’s march against the Trump administration’s immigration polices on June 28, 2018 in Los Angeles, Calif. Protestors called for an end to President Trump’s family separation policy along the U.S.-Mexico border. (Photo by Mario Tama/Getty Images)(CNSNews.com) – The removable aliens that Immigration and Customs Enforcement arrested in the United States in fiscal 2019 included individuals who had been convicted of 1,549 homicides, according to data published in a report by the Inspector General for the Department of Homeland Security.

That was down slightly from the 1,641 homicide convictions the aliens arrested by ICE in fiscal 2018 had accumulated, according to ICE’s “Enforcement and Removal Operations” (ERO) report for that year.

It was slightly more, however, than the 1,531 homicide convictions the aliens ICE arrested in fiscal 2017 had accumulated, according to ICE’s ERO report.

Prior to fiscal 2017, ICE told CNSNews.com, the agency did not publish the number of homicide convictions accumulated by the aliens it arrested.

Had the 4,721 total homicides that the aliens arrested by ICE in the three fiscal years from 2017 to 2019 been committed over a similar span of three years, they would have amounted to more than 4 homicides per day.

“In fiscal year 2019, ICE arrested 143,100 aliens who were either charged with or convicted of 489,100 various crimes,” said the IG report. “Appendix C details the categories of arrests by violation.”

Specifically, according to Appendix C, the aliens arrested by ICE in fiscal 2019 had been convicted of 320,160 crimes and charged with an additional 168,903 crimes.

The most common criminal conviction among the aliens ICE arrested in fiscal 2019 was driving under the influence. During the year, ICE arrested aliens with 49,106 DUI convictions.

In addition to the 320,160 criminal convictions accumulated by the aliens arrested by ICE last year, those aliens also accumulated 168,903 criminal charges.

In total, the aliens ICE arrested in fiscal 2019 had been charged with or convicted of 489,063 criminal offenses.

The alien arrestees not only had 1,549 homicide convictions they also had 374 homicide charges.

These numbers were published in an appendix to a report released February 18 by the DHS Inspector General. The report—‘U.S. Immigration and Customs Enforcement’s Criminal Aliens Program Faces Challenges”—looked at how ICE handles aliens convicted or charged with crimes.

The report noted that “uncooperative jurisdictions” in the United States make it more difficult for ICE to apprehend and remove criminal aliens.

“ICE refers to state and local law enforcement agencies, prisons, or jails that do not fully cooperate with ICE detainers as ‘uncooperative jurisdictions,’” says the report.

According to the report, uncooperative jurisdictions that do not cooperate with ICE can put “public safety at risk.”

“Through CAP, ICE can successfully identify aliens charged or convicted of crimes,” said the IG report. “However, because ICE relies on cooperation from other law enforcement agencies, it faces challenges apprehending aliens in uncooperative jurisdictions. ICE’s inability to detain aliens identified through CAP who are located in uncooperative jurisdictions, results in increased risk those aliens will commit more crimes.

The IG report cited two cases that occurred in uncooperative jurisdictions in 2018 in which the jurisdiction released an alien who then went on to be charged with committing murder.

“In February 2018, an alien was released,” said the report. “In November 2018, the alien was rearrested and charged with murdering three people, and multiple other felonies.”

“In March 2018, an alien was released,” said the report. “In October 2018, the alien was rearrested and charged with murdering his wife.”

“ICE does not have sufficient resources to arrest all at-large aliens, especially in uncooperative jurisdictions that often do not honor detainers and release criminal aliens,” says the report.

ICE told CNSNews.com that its reports on the number of aliens who faced homicide “charges”—as opposed to those who had been convicted of homicide—counts “aliens who, at the time of ICE arrest, had outstanding criminal charges for homicide in the U.S. or abroad.”

“The outcomes” of these cases,” ICE said, “could be numerous, to include the alien going on to be convicted and sentenced in the U.S. and turned back over to that jurisdiction to serve their time, to the alien being turned over to a foreign government where they are wanted for criminal charges, abroad, to the alien being acquitted, etc.”

ICE said it “does not have the data” on how many of the aliens arrested in fiscal years 2017 through 2019 who had been convicted of homicide were handed over on detainers from state or local law enforcement and how many ICE had to arrest at-large.