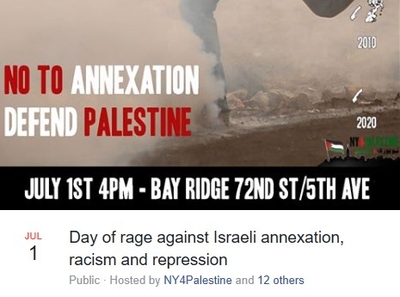 A chant of “death to Israel” and “death to America” triggered an enthusiastic response Wednesday during an anti-Israel protest in Brooklyn.

Similar rallies were held throughout the country, ostensibly to oppose a possible Israeli annexation of some West Bank settlements. But the speeches and chants made it abundantly clear that the participants oppose Israel’s very existence, and the settlement debate simply offered an opportunity to voice their desire to see the world’s only Jewish state eliminated.

The rallies also witnessed the ever expanding spectrum of “intersectionalism,” in which organizations and movements—supporting everything from North Korea to the Seattle COVID Mutual Aid Group – which are entirely unrelated to the Middle East joined in common cause in the only issue they seem to have in common: the destruction of the State of Israel.

So it was at the rally in Brooklyn yesterday that the crowd embraced a speaker who lauded North Korea – which has one of the world’s worst human rights records – for its refusal to recognize Israel.

A woman representing the New York-based Nodutdol, which says it is “[i]nspired by the democratic social movements in Korea,” said Koreans who seek to unite North and South understand the Palestinian cause.

We Koreans recognized that the struggle against imperialist aggressors in our land back home is something our Palestinian comrades understand firsthand,” said the woman, who was identified as Jamie Tyberg. “And we also know that the fight for self-determination is as much Korea’s fight as much as it is Palestine’s. The solidarity between Koreans and Palestinians dates back to 1966, when the DPRK officially started supporting the Palestine Liberation Organization. The DPRK [provided] small amounts of arms and military aid to several revolutionary movements in Palestine. The DPRK also refuses to recognize Israel and calls it an imperialist satellite of the United States.”

It’s tempting to wonder if Sasha Baron Cohen wasn’t in disguise pulling another prank. But using North Korea to bash Israel fits neatly into a key element of the International Holocaust Remembrance Alliance’s (IHRA) working definition of anti-Semitism: “Applying double standards by requiring of it a behavior not expected or demanded of any other democratic nation.”

North Korea isn’t even a democratic country. It is among the world’s most brutal dictatorships, controlled by the Kim family for 70 years. The U.S. State Department’s most recent country report casts a long and depressing account of life in the DPRK.

“Significant human rights issues included: unlawful or arbitrary killings; forced disappearances by the government; torture by authorities; arbitrary detentions by security forces; harsh and life-threatening prison conditions, including in political prison camps; political prisoners; arbitrary or unlawful interference with privacy; no judicial independence; restrictions on free expression, the press, and the internet, censorship, and site blocking; substantial interference with the rights of peaceful assembly and freedom of association; severe restrictions of religious freedom; restrictions on freedom of movement; restrictions on political participation; widespread corruption; coerced abortion; trafficking in persons; the outlawing of independent trade unions; the use of forced or compulsory child labor; the use of domestic forced labor through mass mobilizations and as a part of the re-education system; and the imposition of forced labor conditions on DPRK overseas contract workers.”

It sounds bad, right? But those colonialist-running-dog-lackeys at the State Department give the DPRK no credit for refusing to recognize Israel.

But non-governmental watchdogs, including those critical of Israel, are no less forgiving.

As part of its programming, Nodutdol arranges trips to North Korea for young Korean-Americans. To be fair, Nodutdol Solidarity Committee coordinator, Cheehyung Kim in 2006 said the group does “not support everything about North Korea, and we do not criticize everything about the U.S. either. We are like hundreds of other progressive groups—we criticize both countries.”

But Tyberg, who also put her enthusiasm for DPRK/Palestinian solidarity in writing, wished for only one country’s end.

“I believe that within our lifetime, Palestine will be yours again and Korea will be one again,” she said to cheers. “And the United States of America and all of its puppet governments will be no more.”

The protest was sponsored by a dozen groups, including the US Palestinian Community Network, Al Awda: The Palestine Right to Return Coalition, Majlis Ash-Shura of New York, NY4Palestine, Existence is Resistance and Samidoun Palestinian Prisoner Solidarity Network.

“Denying the Jewish people their right to self-determination” is another element in the IHRA anti-Semitism definition. But the protest included chants that, like the Nodutdol representative, called for Israel’s elimination. That includes the ubiquitous “from the river to the sea, Palestine will be free” chant. Geographically, a Palestinian state stretching from the Jordan River to the Mediterranean Sea envelopes Israel.

Another call-and-response chant was even clearer.

“We do not simply want an end to annexation. We want full liberation and return. This is our land. All of it. And we want it all back.”

And that’s what another speaker, Comrade Rob, with the Party for Socialism and Liberation, made clear is the ultimate objective. He ended his remarks with an intersectional appeal.

“So it’s only through the unity of black and Palestinian people, and Puerto Ricans, and all oppressed people, all occupied people everywhere – it’s only through that that we can win,” he said. “Only through joining hands and saying in one voice: Forgive my Arabic for a second. ‘Death to Israel. Death to America.'”

A voice off camera says, “that was good, huh?”