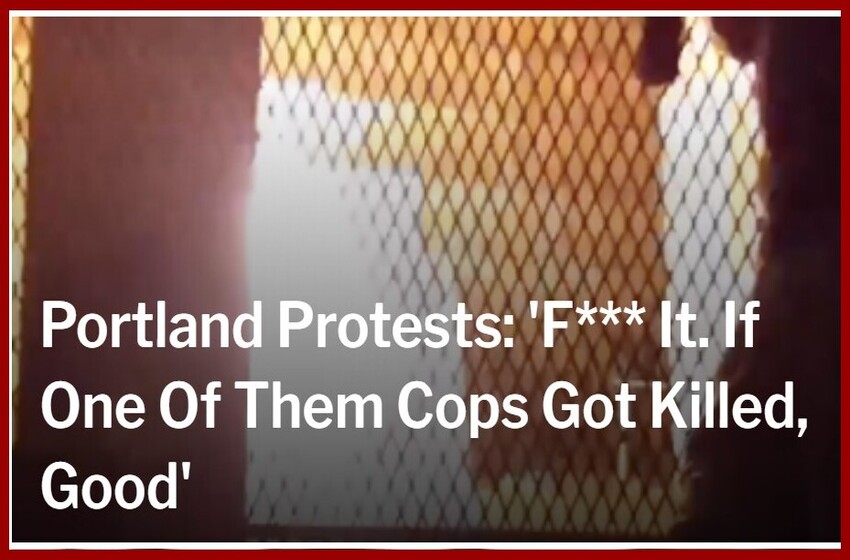 The Daily Caller interviewed some Portland protesters about the possibility that an explosion near the federal courthouse could kill or injure a police officer, to which the protestors responded with laughs and a resounding “F*** it”.

“Did you guys see that explosion though, out there?” McGinniss asked.

“I saw lots of cool explosions,” the nearest protester replied.

“Do you see that one right up against the wall, that big one,” McGinniss inquired.

The nearest protestor responded, “I think I know what you’re talking about, yeah.”

“What do you think about that?” McGinniss continued.

The nearest protester responds with a thumbs up.

“Do you think that would hurt the cops if it f***ing blew up on them?” McGinniss added

“Probably yeah. Oh my G-d yeah. I wouldn’t want to sit in there, that’s all I have to say. I didn’t throw it, so I have nothing to do with it,” the nearest protester explained.

“What would you think if that did blow up around the cops, like, what if one of the cops died?” McGinniss asked.

The nearest protester laughs off the question, the other said, “F*** it. If one of them cops got killed, good.”

I asked these guys what they thought about the large explosion outside the doors to of the federal courthouse last night:

“What would you think if one of those cops died?”

“Fuck it. If one of them cops got killed, good.” pic.twitter.com/vzJ6jJyZmY