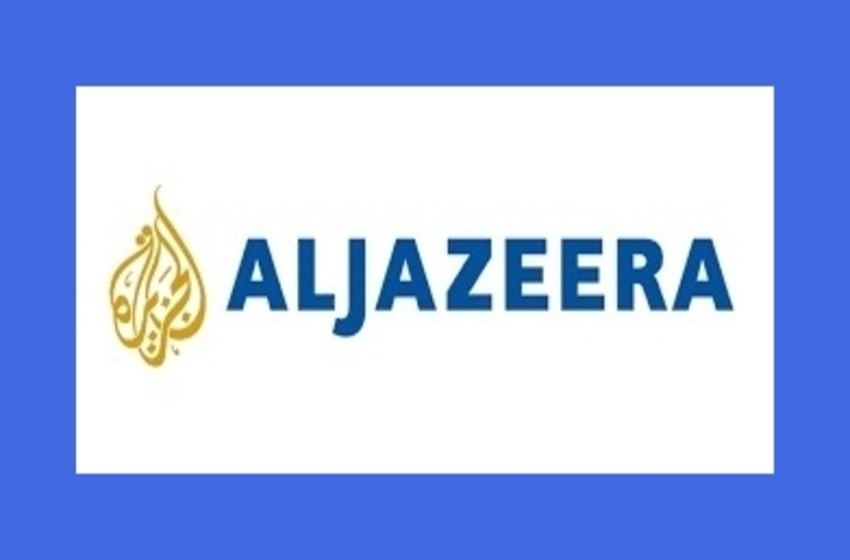 An explosive new report released last Tuesday by former U.S. Rep. Ileana Ros-Lehtinen, R-Fla., provides compelling evidence that the Al Jazeera television network has been operating for years as an agent of the Qatari government. This is a clear violation of the Foreign Agents Registration Act (FARA), which requires agents of foreign governments to acknowledge their connections to those governments publicly. Ros-Lehtinen, former chair of the House Foreign Affairs Committee, is now a lobbyist with the firm Akin Gump Strauss Hauer & Feld LLP.

The government of the United Arab Emirates commissioned Ros-Lehtinen’s investigation of Al Jazeera.

The UAE and Qatar are regional rivals on the Arabian Peninsula. The veracity of Al Jazeera’s status as a Qatari asset, however, is corroborated by Al Jazeera’s own unmistakable record of promoting Hamas and other terrorist entities, as well as the Muslim Brotherhood, anti-Semitism, and Islamic extremism. Al Jazeera has continued this promotion even within the past year.

Many have noticed. As long ago as December 2009, a State Department cable stated that Qatar was using Al-Jazeera as “an informal tool … of foreign policy.” Nothing has changed in the intervening years. Middle East Online (MEO) reported in January that Al Jazeera had begun “advocating for policies aligned to Gulf emirate, costing it audiences and credibility, especially on the Arabic channel.” Even Facebook “notified Al Jazeera late last year it would be tagged as ‘state-controlled,'” the MEO report said.

MEO noted that the network “has drawn the ire of regional rulers from Rabat to Riyadh for allegedly fomenting unrest and backing Islamists during the Arab Spring revolution that has gripped the Arab world.”

In June 2019, a group of Republican lawmakers asked the Justice Department whether Al Jazeera should have to register as a foreign agent of Qatar.

The Ros-Lehtinen report notes that “Qatar uses Al Jazeera strategically to advance its foreign policy objectives,” including to support Iran and promote Hamas. What’s more, “the highest levels of Qatar’s leadership have openly supported leaders of terrorist and extremist groups.”

Al Jazeera supports not just Hamas, but the entire Palestinian terrorist enterprise and efforts to delegimitize and destroy Israel. Al Jazeera’s longtime cartoonist Ummaya Joha has used her cartoons to glorify Hamas, celebrate terrorism and promote anti-Jewish blood libels. She has also spread anti-Semitic imagery and incitement. Joha is reportedly Hamas-affiliated and her first and second husbands were both Hamas terrorists. 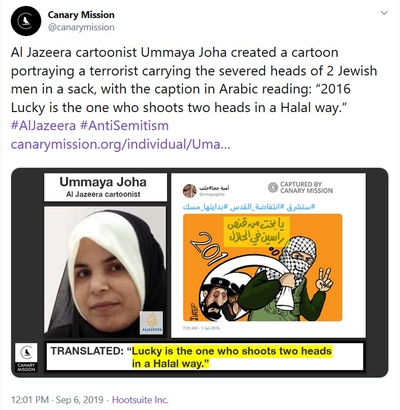 Last December, Al Jazeera aired a speech by former Hamas Political Bureau chief Khaled Mashal. In it, Mashal declared that Palestinian women are “martyrdom-seekers, they help prepare martyrdom-seekers, and they play their role in the resistance.” All Palestinian political entities bestow the title of “martyr” upon those killed while trying to murder Israelis, including civilians.

It is not surprising in light of these facts that Al Jazeera would also actively support non-violent efforts to destroy Israel. In January, Omar Barghouti of the Palestinian Campaign for the Academic and Cultural Boycott of Israel, who is also co-founder of the Boycott, Divestment and Sanctions movement, said on AJ+ (Al Jazeera Plus): “Now is the time to go for serious sanctions against Israel. Now is the time to make Israel pay a price for its ongoing decades of colonization. Until now, the official Palestinian representatives have never called for sanctions against Israel, have never called for a military embargo on Israel, have never done anything effective to hold Israel to account, really. So now is the time after dropping any and shedding all illusions about as possible a peace plan. Now is the time to go with intensifying popular resistance and intensifying the boycott, divestment and sanctions or BDS movement against Israel worldwide.” 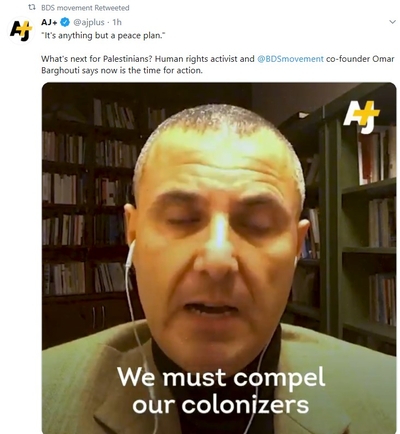 The Qatari network’s hatred for Israel has marred its analysis of unrest in the United States. The network’s AJ+ YouTube channel published a video July 2 claiming that Israelis taught American police officers to brutalize and mistreat communities of color. “So this is a state,” the report said of Israel, “that violently controls and suppresses the rights of an occupied people, and US police are learning its tactics to use against American citizens.” 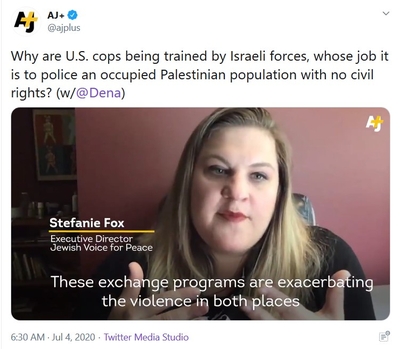 Support for terrorists by Al Jazeera personnel extends beyond those dedicated to destroying Israel. The Investigative Project on Terrorism reported in February that Al Jazeera senior anchor Jamal Rayyan asked his Twitter followers whether “highly trained ‘special squads'” should “deal with” Arab leaders who supported President Donald Trump’s “Deal of the Century” for Israel and the Palestinians. 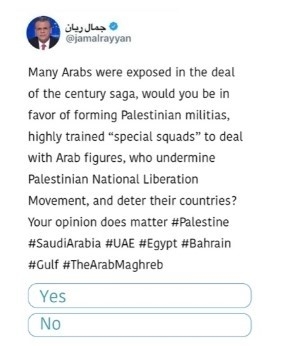 Rayyam is also a deeply committed anti-Semite who has tweeted in Arabic accusing Egyptian President Abdel Fattah el-Sisi, a vociferous foe of the Muslim Brotherhood, of being a Jew. 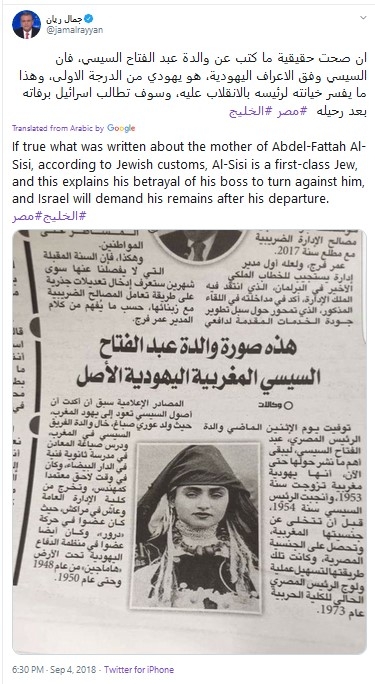 Rayyam’s hatred for el-Sisi is consistent with Al Jazeera’s longstanding positions. As the IPT reported, Al Jazeera “promoted Islamist movements during the 2011-12 Arab Spring revolutions. It propped up Islamist agendas in the Middle East, especially those tied to the Muslim Brotherhood. The network’s pro-Brotherhood bias prompted more than 20 Al Jazeera staffers to resign in 2013 in protest.”

Most notoriously, Al Jazeera in 2009 aired a program featuring Muslim Brotherhood spiritual guide Yusuf al-Qaradawi saying: “Allah has imposed upon the [Jews] people who would punish them for their corruption. The last punishment was carried out by Hitler. By means of all the things he did to them – even though they exaggerated this issue – he managed to put them in their place. This was divine punishment for them. Allah willing, the next time will be at the hand of the believers. … I will shoot Allah’s enemies, the Jews, and they will throw a bomb at me, and thus, I will seal my life with martyrdom. Praise be to Allah, Lord of the Worlds. Allah’s mercy and blessings upon you.”

Al Jazeera’s support for terrorism has drawn criticism even from Syria’s opposition Orient TV, which in January aired a report harshly critical of how the Qatari network covered the killing of Iranian Quds Force commander and international terror mastermind Qasem Soleimani. In Al Jazeera’s coverage, “whole hours are dedicated to guests who echo the official Iranian narrative,” the Orient TV report said. Al Jazeera “aired what it referred to as a ‘popular funeral for Qasem Soleimani in Iraq,’ while completely ignoring other Iraqis’ joy over the killing of that arch-killer, whose hands were soaked in their blood.”

On May 8, an Al Jazeera podcast praised Soleimani in effusive terms, with a narrator intoning: “I am Qasem Soleimani, the soldier who dedicated his life to serve Islam and to serve the Islamic Revolution, its greatness, and its honor. I am Soleimani, the soldier waging Jihad for the sake of Allah, commander of the Qods Force in the Iranian IRGC – the name that the Great Satan and the Zionist enemy fear….I praise Allah for purifying my heart from love of this world and granting me my loftiest wish — martyrdom for His sake.”

All this makes it is no surprise that the Council on American-Islamic Relations (CAIR), which was listed among organizations tied to the Muslim Brotherhood’s American network, has received funding from Qatar. A 2013 Daily Caller report cited tax records to show that the government of Qatar had given CAIR $405,000 over a five-year period.

CAIR and Al Jazeera clearly share many of the same goals, including that of whitewashing Hamas’s crimes and discrediting Israel in the court of public opinion. The Ros-Lehtinen report is a valuable contribution to the ongoing unmasking of Al Jazeera and Qatar’s insidious endeavors within the United States. The UAE long ago took the courageous and unprecedented step of designating CAIR and other MB groups as terrorist organizations. Now, the UAE deserves to be congratulated for commissioning an independent report documenting how Al Jazeera has been systematically breaking the law by not registering as a foreign agent under the laws governing FARA. DOJ—are you listening?